Charlie and the Railroad : Mardant Electrical

The sun has barely risen over Jacksonville when Charlie Mardant steps to the gate of Mardant Electrical. It is 5:30 AM, as it usually is when Charlie opens - "that's when I'm here, most days" -  and the just-up sun reflects off Charlie's substantial fleet of white trucks.

The office inside has an almost homey feel, in spite of its size and all the early morning activity. Members of Charlie's team come and go, seeking his advice and counsel,  including his son, company President Randy Mardant, already deeply immersed in a current electrical project.

Sitting in his office, Charlie reflects upon a lifetime of experience, describing how he has served the Jacksonville business community since he first apprenticed, then became a licensed, working electrician, before beginning his own firm in 1976.

During this entire time, Charlie and his team have kept the railroad running and grown to be one of Jacksonville's largest and most reputable electrical contractors.

While rail may have receded as the preferred form of passenger travel (though several major "high-speed" rail initiatives in the US are currently being discussed and planned), it remains vital to Florida's infrastructure - and essential to its commerce.

Charlie has worked these tracks and passed his knowledge on to his team of IBEW electricians and apprentices since 1964. A short drive from the office, he begins a tour of the Florida East Coast Railroad facility. As we enter the yard, he is greeted by everyone who sees his truck with familiar and friendly waves, and the banter typical of workers who know each other.

Like many successful business owners, Charlie leveraged his expertise serving a particular company and industry; first as a worker, then taking the leap on his own. He has since established Mardant Electrical as an electrical services provider to some of Jacksonville's largest corporations, in particular, FEC which moved its headquarters to Jacksonville in 2003.

FEC, itself the product of industry-wide consolidation in the 1970s,  has relied upon Mardant electrical now for over 4 decades.

For industry, rail remains the backbone of the Florida and American transportation system. Hundreds of retailers and millions of Americans rely on the daily, safe delivery of large freight hauled over “350 of miles of Florida East Coast track,” according to Charlie.

Mardant Electrical is making sure the goods reach the shelves. The railroad here is a moving supply chain, running from Jacksonville to Miami, delivering goods for Best Buy, Home Depot, various car manufacturers, (the freight cars can actually fit automobiles inside), and many others.

The railroad yard where the electricians ply their trade lies on an expansive, seemingly endless swath of land cut into the woods behind Phillips Highway, not far from Charlie's shop. It is land -and the tracks and freight trains that run over it - that Charlie knows well, having worked it since the 1970s. Then, Charlie was a man with a truck, working alone, climbing poles without a “picker," strapping his the way to the top, working with high-voltage wires.

The work was exciting and dangerous. One time, Charlie, barely tethered to one of the poles, fell nearly thirty feet after receiving a shock.  He considers himself lucky to have survived: “I was dead when  I hit the ground, then I came back. “ It's his intimate knowledge of the grounds, and the inherent dangers of electrical work performed in an industrial setting, that is indispensable to both his workers and his clients.

Charlie is a trusted partner of not only FEC but other Jacksonville firms who have “worked with us for years.” When asked how he has been able, in tough economic times, to sustain his base of clients, Charlie says “it's simple – history of  past performance.” To Charlie, this means being acutely familiar with his clients' business and electrical requirements and meeting those specifications “one way, all the time. The right way.”

This means ensuring the trains keep-a-rolling, through and out the rail yard, over Jacksonville's bridges, and across its switch towers,  now operated via remote control, the bridge tender another part of the past. (Mardant Electrical also performs the monthly and quarterly inspections for switch towers along the Trout River and Lake Monroe.)

As Jacksonville and Florida's energy infrastructure remakes itself via energy retrofits, green building, and the deployment of alternative energies, Charlie says Mardant Electrical is poised to assist with the next great leap, thanks to the IBEW's skills enhancements.

At the same time, Charlie says, certain values “never get old, and they don't go out of style.” One of those, he says, is “integrity,” which includes how his team does the job, resulting in a “superior, finished electrical product.”

In Charlie's mind, this is what any customer wants and expects: "a good crew, people on the job who are trained, and have the ability to do the work."

Translation: all systems running and working together, safely, in tandem, the freight rolling down the line, all day and all through the night.

Charlie closes out his tour by walking us through an antique luxury sleeper car, which now includes the latest amenities, still used by company executives to entertain clients.  He clearly has a kid's affinity for the railroad and his enthusiasm no doubt inspires Mardant's electricians.

He's proud of his lifetime of service to Jacksonville's transportation industry, attributing his overall success to the positive attitudes of his crews, and their willingness to adapt consistently to new innovations.  That flexibility, he says, is embodied by the well-trained workers he receives from the IBEW. 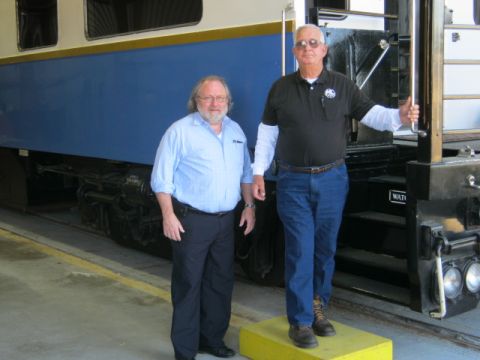 Charlie views affiliation with the IBEW as his lifeline to properly-trained and qualified electricians when he needs them. As an electrical job “ramps up,” he says, he can immediately bring on the IBEW's safety-conscious workers “who are gonna perform the work correctly the first time.” The benefit to Charlie, and to customers like FEC, is everyone avoids “add-on costs  and head-aches associated with an expanding punch list.” So long as the IBEW delivers the workers who meet the Mardant Electrical work ethic, Charlie sees the relationship continuing.

Even at 76, Charlie Mardant is looking forward. Tomorrow he will open the gate right at 5:30, with the promise and expectations of a new day, and a new era of challenges in the electrical and transportation industry. Whatever comes, Charlie knows Mardant Electrical will keep the trains running on time.